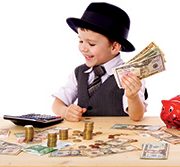 It’s not uncommon for parents, grandparents and others to make financial gifts to minors and young adults. Perhaps you want to transfer some appreciated stock to a child or grandchild to start them on their journey toward successful wealth management. Or maybe you simply want to remove some assets from your taxable estate or shift income into a lower tax bracket. Whatever the reason, beware of the “kiddie tax.” It can play costly games with the unwary.

Years ago, the kiddie tax applied only to those under age 14. But, more recently, the age limits were revised to children under age 19 and to full-time students under age 24 (unless the students’ earned income is more than half of their own support).

Another important, and even more recent, change to the kiddie tax occurred under the Tax Cuts and Jobs Act (TCJA). Before passage of this law, the net unearned income of a child was taxed at the parents’ tax rates if the parents’ tax rates were higher than the tax rates of the child. The remainder of a child’s taxable income — in other words, earned income from a child’s job, plus unearned income up to $2,100 (for 2018), less the child’s standard deduction — was taxed at the child’s rates. The kiddie tax applied to a child if the child:

Now, under the TCJA, for tax years beginning after December 31, 2017, the taxable income of a child attributable to earned income is taxed under the rates for single individuals, and taxable income of a child attributable to net unearned income is taxed according to the brackets applicable to trusts and estates. This rule applies to the child’s ordinary income and his or her income taxed at preferential rates. As under previous law, the kiddie tax can potentially apply until the year a child turns 24.

The Tax in Action

Let’s say you transferred to your 16-year-old some stock you’d held for several years that had appreciated $10,000. You were thinking she’d be eligible for the 0% long-term gains rate and so could sell the stock with no tax liability for your family. But you’d be in for an unhappy surprise: Assuming your daughter had no other unearned income, in 2018 $7,900 of the gain would be taxed at the estate and trust capital gains rates, equal to a tax of $795.

Or let’s say you transferred the appreciated stock to your 18-year-old grandson with the plan that he could sell the stock tax-free to pay for his college tuition. He won’t end up with the entire $10,000 gain available for tuition because of the kiddie tax liability.

Fortunately, there may be ways to achieve your goals without triggering the kiddie tax. For example, if you’d like to shift income and you have adult children (older than 24) who’re no longer subject to the kiddie tax but in a lower tax bracket, consider transferring income-producing or highly appreciated assets to them.

Many families wait until the end of the year to make substantial, meaningful gifts. But, given what’s at stake, now is a good time to start a methodical process to determine the best possible way to pass along your wealth. After all, with the many changes made under the TCJA, the kiddie tax might affect you in ways you weren’t expecting. The best advice is to simply run the numbers with an expert’s help. Please contact us for more information and some suggestions on how to achieve your financial goals.