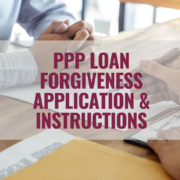 On May 15th, the SBA released the PPP Loan Forgiveness Application and Instructions. This new guidance clears up a few of the unknown items with PPP loan forgiveness for borrowers and lenders.

Due to this new guidance, payroll and other costs (such as rent, business mortgage interest, and utilities) can now be incurred OR paid during the Covered Period or Alternative Payroll Covered Period.

Per the application instructions, FTEs are calculated based on an employee’s average number of hours paid per week divided by 40 and round the total to the nearest tenth. The maximum for each employee is capped at 1.0 FTE. This new guidance also created a simplified method that assigns a 1.0 FTE for employees who work 40 hours or more per week and .5 for employees who work fewer hours.

Along with the previous exception of the Borrower making a good-faith, written offer to rehire an employee during the Covered Period or Alternative Payroll Covered Period with the employee declining employment, the new exemptions added the following:

A detailed list of documents required for forgiveness is included with the application on page 10, linked here.

The order of these reductions was not clear prior to the issuance of the forgiveness application. It is now clear that the salary or wage reduction is considered before the FTE reduction.  This should generally be favorable to employers.

Observations and Unknowns Related to Application and Instructions

Although this new guidance clears up some of the outstanding questions regarding PPP loan forgiveness, there are still questions as to a few issues needed for many borrowers, including:

Our team continues to monitor these updates as they are released. Please contact us with questions. We are always here to help.