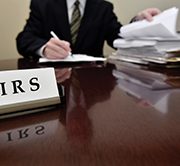 Around this time of year, many people have filed and forgotten about their 2017 tax returns. But you could get an abrupt reminder in the form of an IRS penalty. Here are three common types and how you might seek relief:

1.     Failure-to-file and failure-to-pay. The IRS will consider any reason that establishes that you were unable to meet your federal tax obligations despite using “all ordinary business care and prudence” to do so. Frequently cited reasons include fire, casualty, natural disaster or other disturbances. The agency may also accept death, serious illness, incapacitation or unavoidable absence of the taxpayer or an immediate family member.

If you don’t have a good reason for filing or paying late, you may be able to apply for a first-time penalty abatement (FTA) waiver. To qualify for relief, you must have: 1) received no penalties (other than estimated tax penalties) for the three tax years preceding the tax year in which you received a penalty, 2) filed all required returns or filed a valid extension of time to file, and 3) paid, or arranged to pay, any tax due. Despite the expression “first-time,” you can receive FTA relief more than once, so long as at least three years have elapsed.

2.     Estimated tax miscalculation. It’s possible, but unlikely, to obtain relief from estimated tax penalties on grounds of casualty, disaster or other unusual circumstances. You’re more likely to get these penalties abated if you can prove that the IRS made an error, such as crediting a payment to the wrong tax period, or that calculating the penalty using a different method (such as the annualized income installment method) would reduce or eliminate the penalty.

3.     Tax-filing inaccuracy. These penalties may be imposed, for example, if the IRS finds that your return was prepared negligently or that there’s a substantial understatement of tax. You can obtain relief from these penalties if you can demonstrate that you properly disclosed your tax position in your return and that you had a reasonable basis for taking that position.

Generally, you have a reasonable basis if your chances of withstanding an IRS challenge are greater than 50%. Reliance on a competent tax advisor greatly improves your odds of obtaining penalty relief. Other possible grounds for relief include computational errors and reliance on an inaccurate W-2, 1099 or other information statement.